The services of an Applied Inspection NDT Level 3 consultant were requested by one of our customers to investigate porosity issues relating to subsea welds. The problem related to the interpretation of radiographs of riser welds; the radiographs showed that there was a considerable amount of porosity in the welds but there were differences of opinion in quantifying the amount, size and shape of the porosity.  This resulted in differing views as to the correct determination, in relation to compliance with the code.

An impasse had been reached between the Energy Group and their client. Eighteen welds had been rejected to the code by the Australian NDT sub-contractor for excessive porosity. However, the client’s NDT Level 3 recommended over-ruling the NDT sub-contractor’s results for all 18 welds, based primarily on the fact that the radiographs contained a large number of ‘non-relevant’ pores, i.e. they were smaller than 0.8 mm – the threshold specified in the ASME VIII code.

These pores tended to make objective viewing of the films almost impossible as in most cases there were so many non-relevant pores that this issue clouded the interpretation; it was not possible for the radiographic interpreter to compare only the relevant pores against the porosity charts, as required by the Code.

The Applied Inspection NDT Level 3 consultant suggested that a possible solution to the impasse might be to digitise the radiographs, then ask our operator – who is a qualified radiographer (PCN and ASNT Radiographic Interpreter Level 2) and a software specialist to remove all non-relevant gas pores digitally, then he would re-assess the radiographs to the ASME code as an independent NDT Level 3.

The client accepted the proposal and a representative sample of 17 radiographs was selected and digitised using a Computerised Information Technology Limited (CIT) DR3000 Radiograph Film Digitisation System. The Applied Inspection software expert created a computer program to digitally remove the non-relevant pores the TIF files generated. He then produced PDF print-outs scaled at 100 per cent. The scaling was confirmed on the print-outs by measuring the two adjacent 100mm ‘rulers’ on each image (see below). 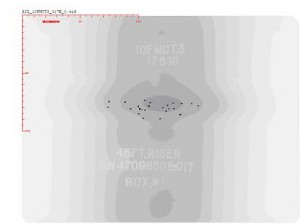 The following are screen-shots from the application written by our software expert showing the porosity; firstly unfiltered and then filtered. 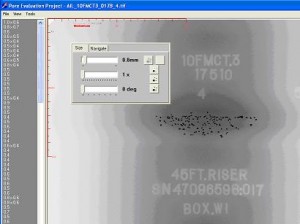 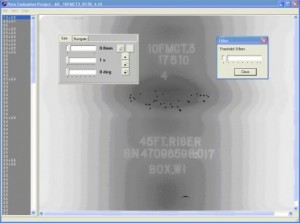 Final interpretation was carried out by our NDT Level 3 consultant. Interpretation was carried out to ASME B31.3 NFS and ASME VIII Appendix 4 acceptance criteria from print-outs of the digitised radiographs created by our software specialist, following the digital removal of the non-relevant pores. The print-outs were scaled at 100 per cent, and viewing was supported by conventional direct viewing of the x-ray films for non gas flaws.

The final outcome was that nine films were acceptable to the code, and eight were rejected.

The results tend to confirm what the client’s NDT sub-contractor and their client’s radiographic interpreters appeared to find, that it is extremely difficult to interpret porosity against the ASME VIII Appendix 4 porosity charts with a very large number of non-relevant pores present. The non-relevant pores confuse the image being viewed to the extent that it is not realistic to expect even an experienced radiographic interpreter to be able to accurately interpret the films in terms of accept or reject to the Code.

With our vast depth of knowledge and many years of experience; combined with our software expertise in relation to NDT, we were able to find a way through a particularly difficult situation for our client.