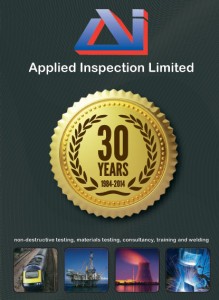 Within eight years the company had expanded with the opening of the Burton on Trent site in 1992, again providing a non destructive testing service and it was just two years later that welding services, in the form of a casting upgrade capability, was added.

By 1995 the Leeds site opened, providing a local NDT service to companies in the north of the country and things didn’t stand still for long then either as by 1996, a materials testing service was being provided; operating out of the Burton laboratory but covering the whole of the UK.

Around 1998 our rail division was established with a satellite office opening in Glasgow, headed by a level III ultra- sonic axle testing specialist. Customers included major infra-structure operators, train build and train maintenance companies as well as many companies involved in the rail supply chain. The work we have been involved with since the rail division was established has taken our operators around the world and put Applied Inspection at the forefront of axle testing.

Our NDT service offering was expanded in July 2011 with the inclusion of a Rope Access inspection service which uses ropes and climbing skills to access difficult to reach locations, negating the need for scaffolding or elevated platforms.

There are a number of staff who have seen the company grow and develop throughout this 30 year period and have contributed to its success and we look forward to the next 30 years.