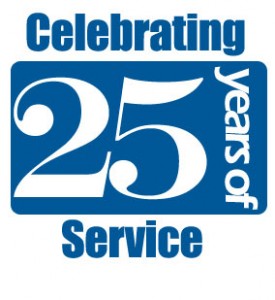 Operations Manager, Steve Redshaw recently celebrated 25 years with Applied Inspection. It was back in July 1988 that he joined Applied Inspection when the company operated from just one site at Holmewood in Chesterfield.

He was initially involved in radiographic testing on the night shift before changing to the day shift and taking on some supervisory duties.  After five years in this role Steve joined NDT technician Ted Peake (who is now our Managing Director) in developing the new site in Burton on Trent. Now he was involved with all aspects of NDT as the two of them provided services around the clock, as well as seeking new customers in order to grow the business. It was some six months before they were in a position to take on more technicians to cover both laboratory work and site services. One of the more unusual jobs Steve remembers from those times was undertaking radiograph testing on a ham joint on behalf of a meat processing plant. The radiographs later formed evidence in a court case.

Steve later became Production Manager for the laboratory and site services and in 2009 he moved in to the role of General Manager, still at our Burton site-where he remains today. As is often the case, Steve came in to the world of NDT from a welding background and has commented. “My career now spans almost 34 years and has taken me all over the world. I do remember one of the Directors saying he didn’t think I would be with the company long as he thought I would want to be working overseas again. How wrong he was.”

Steve now joins the ever-growing group of staff employed by Applied Inspection for over 25 years. A few months ago Steve was presented with an engraved gold watch by Clive Millard, Finance Director.